Charlie, Meg and baby Eli live near Lammas ecovillage in West Wales and have been inspired to make a stunning roundhouse. The home has the turf roof, straw bale insulation and lime render which are fast becoming the vernacular in low impact building in Wales. 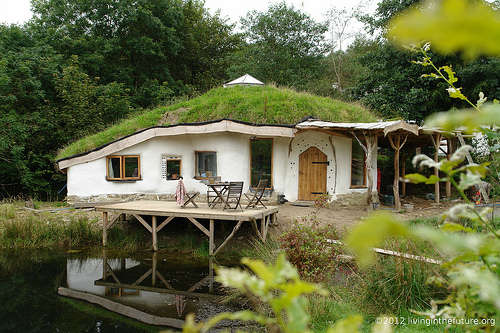 In July 2015, Charlie and Meg got the news that their beautiful roundhouse has been granted planning permission. This follows almost two years of campaigning against the initial planning decision to order a demolition. Why is this significant?

Well, if you watch the film, you'll see that Charlie and Meg built the low-impact building without asking for planning permission. Charlie explains his thinking behind this, and the couple have held strong to their conviction during several appeals. At a time when housing is not affordable for young people, even in rural Wales, buying a house was not an option. So when a group of people moved onto the land next door to Charlie's family and started creating Lammas ecovillage, Charlie and Meg were understandably inspired. At Lammas, the homes were made from local, renewable materials, such as wood from their own sustainably-managed forest cob and straw bales to insulate and weather-proof the walls. The reciprocal framed roof was modelled on those used by Tony Wrench and Simon Dale, two of the best-known eco-builders in the UK. They even popped by and helped him out!

Lammas ecovillage was granted planning permission under stringent new regulations for low impact living, now rolled out across wales as a progressive plan known as One Planet Development. Finally, the planners have agreed to grant retrospective planning permission, since the roundhouse, and the lifestyle lived by Charlie and Meg, is in accordance with these rules.
Or maybe it was just too beautiful to knock down...

Charlie's house is not the first natural home in Wales to take on the planning department. Tony Wrench's roundhouse was also threatened - several times - with demolition, but if you look at the new booklet produced by the Welsh government, describing the One Planet Development policy, you'll notice that the the picture on the front is the very same house they wanted to knock down!

I'd like to take my hat off to the forward thinking folk at the Welsh government and planning department, for having both the guts and the humility to see the possibilities inherent in these stunning examples of low-impact, high quality homes.
Llongyfarchiadau pawb! (Congratulations everyone!)

To discover more of the building techniques used in Charlie's house, watch our Lammas Film - the fascinating Living in the Future documentary which documents the ecovillage in Wales which inspired Charlie and Meg. Enjoy!

To stay up to date with the latest news, events and film releases, subscribe to our newsletter or follow us on your favourite social media.

Your continued support ensures that we are able to produce new films inspiring positive alternatives. Thank you!